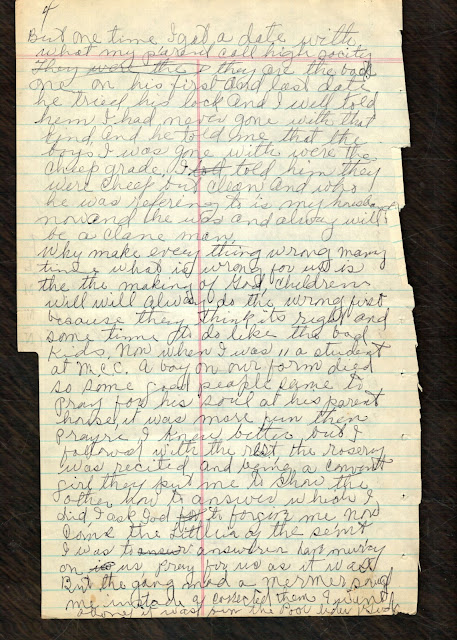 Mama Theaux was such an independent cuss, don't you think?  Now I know where I get my "strong will." I can just see her sneaking out to meet her "sweet heart," sweating bullets and praying to Mother Mary to not get caught. Shall we see what happens next...

Page 4
But one time I got a date with what my parent call high socity [sic]
They were the they are the bad one on his first and last date
he tried his luck and I well told
him I had never gone with that
kind, and he told me that the
boys I was gone with were the
cheep grade. I tod told him they
were cheep but clean and who
he was refering [sic] to is my husband now and he was and always will
be a clane [clean] man.
Why make everything wrong many
times what is wrong for us is
the the making of God, children
will will alway do the wrong first
because they think its right and
some time to do like the bad
kids. Now when I was 11 a student
at M. C. C A boy on our farm died
so some good people came to
pray for his soul at his parent
house, it was more fun then
prayre I knew better but I
followed with the rest, the rosery
was recited and being a convent
girl they put me to show the
other how to answer which I
did, I ask God for to forgive me now
come the littl [liturgy] of the semt [saint]
I was to answr answer in her mercy
on in us, pray for us as it was
But the gang mad [sic] a mermers and
me instead of corrected them I went
allong it was fun the poor lider [leader] God...

(To Be Continued)
Posted by Kim von Aspern-Parker at 6:12 AM 1 comment: