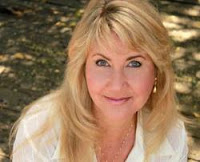 More on the Lisa Louise Cooke Interview in the next post. Stay tuned.
Posted by Kim von Aspern-Parker at 6:00 AM